It’s early on a Wednesday morning at Arlington House.

The rising sun slides light through the headstone-studded hillside and into the old kitchen garden. The plot that once fed Confederate General Robert E. Lee is undergoing a revival.

At the helm is Sandy Newton. She and a friend started volunteering about six years ago to invigorate the garden, which had been neglected in the wake of site renovations. 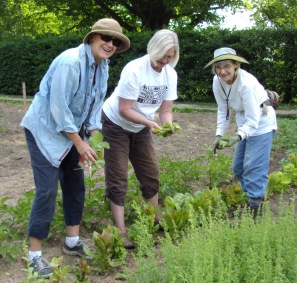 ARLINGTON HOUSE GARDEN VOLUNTEERS: With a row of lettuce running between them, plot tenders on June 8, 2016 are, from left, Mary Resnick, Sandy Newton and Pat White. All Photos Credit: John A. Bray

“There was not a worm in the garden when I got here,” Newton told me when I visited. The count of earthworms has gone up, along with the number of volunteers who have joined the hoeing and sowing at the top of Arlington National Cemetery.

The goal is to cultivate diverse plants, inform visitors about heritage horticulture and provide produce to support food banks.

Many of the plants come from Mount Vernon, where Newton spent 30 years working at the historic farm site that had been overseen by George Washington. It was Washington’s stepson who came to develop the Arlington property and whose daughter married Lee.

About a dozen people now make up the core of volunteers, who come mainly on Wednesdays and Saturdays. Truckloads of aged manure from U.S. Park Police horse stables have enriched the garden soil. Irrigation system improvements are in the works.

Production to supply food banks started slowly. But hundreds of pounds of vegetables now go to places such as the Arlington Food Assistance Center, at least what doesn’t go to the deer. 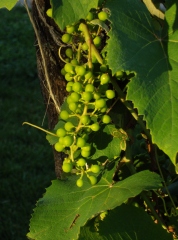 Vines of Concord grapes at the front of the garden flourish with the emergence of bunches of mirth.

“They’ve eaten almost all of our peas. That whole trellis back there was just lush and covered with peas and, thank God, Sue got some before they took it all,” Newton said, referring to a volunteer who saved about 12 pounds for donation.

Newton said the gardeners try to plant with the palates of consumers in mind so that food won’t get wasted. Fennel was planted this year at the request of a volunteer who also works at a food bank across the Potomac River in Washington, D.C.

The Concord grapes, raspberries and blackberries are too perishable for food bank distribution and wind up picked by visitors, staff and birds.

A tawny rabbit dashed across the garden. Another followed.

Newton’s assessment: “We’re keeping up with the weeds, but not the varmints.”

Pat White, who splits her volunteer time between the mansion and the garden, doesn’t mind weed patrol.

“I do whatever needs to be done,” she said. “But I know my strengths and I’m more effective at killing things than making them grow. So I am a weeder.”

An economist by profession, White said she contemplated a home garden. “I laughed after helping out in the garden for about a year. The most important thing I learned was, do not attempt this at home. It’s a tremendous amount of work to actually have a garden. Maybe if you are better at it, it isn’t so much work.”

Michael Francis found “constructive community volunteer work” in the garden, an interest that also led him to a Master Gardener program to advance his botanical knowledge. “It’s kind of daunting, looking at the expanse of garden and what needs to be done,” Francis said. “There’s a lot to know.”

Like a jester’s hat, a bee balm bloom enlivens the flower garden.

But cut bamboo, hauled from a farm ridding itself of the plant, provides trellis material. One structure, a long bamboo tent nearly 10 feet tall, will support cucumbers and vining Tromboncino squash, a light green variety that grows 3 feet long.

“It would feed a lot of people,” Newton said.

Newton, a weaver, planted blue-flowering flax. The cotton sprouting nearby will yield bolls of seedy fiber.

Part of the daily routine includes the regular rolling of caissons and thunder of cannons that accompany funerals. “It causes you to stop,” Newton said. “If we’re working, we’ll go over near the fence and watch. You can hear the horses clopping by.”

Jonathan Moore, a history buff and Washington lobbyist for agricultural research interests, fell for the garden volunteer corps on a site tour when a flier seeking help was pressed into his hand.

“It’s a very reverent and bucolic place, a reminder of people’s sacrifice,” Moore said of the satisfaction he draws. “It’s not only working with the garden. It’s working in history.”