Whatever becomes of the politics of Egypt’s “Arab Spring,” the future of the country’s blooms certainly appears bright, colorful and clear. Really clear.

So it seems through the eye of Amr Mounib, whose compelling flower photographs from Egypt are on exhibit at The Jerusalem Fund Gallery Al-Quds in Washington, D.C., located at 2425 Virginia Ave., across from the Watergate complex. The Eye of the Blossom exhibit runs through April 22, 2016. 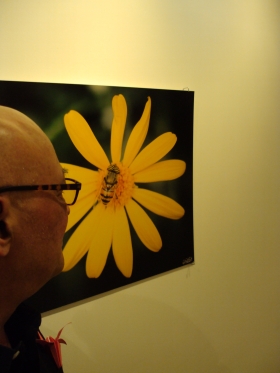 Photographer Amr Mounib peers into one of his images on the opening night of The Eye of the Blossom, his March 25-April 22, 2016 exhibit at The Jerusalem Fund Gallery Al-Quds in Washington, D.C. Photo Credit: John A. Bray

Intimacy suffuses the photographer-subject relationship, which had its beginnings in Mounib’s childhood Cairo home. The garden teemed with color and flavor.

There were mangoes, lemons, limes, dates, guava and jasmine. A branch from a plum tree reached to his bedroom window. He described to me how he was drawn like an insect.

“I’m like a bee. I used to drink the syrup from the flowers. I started to know which flowers gave me more sugar.”

His film lineage goes back to his grandfather, Fawzi Mounib, who produced Egypt’s first silent movies, and his grandmother, Mary Mounib, an actress. His father was a television producer, who also painted and took photographs.

“I bugged my dad to get me a camera, but he wanted me to earn it,” Mounib said. In the meantime, he said he would sneak off with his father’s camera, take photos and replace the film. “He later told me that he knew.”

Mounib, who lives in Virginia, came to the United States in 1969. He served in the U.S. Navy for nine years, earned a degree from The American University, and developed his career as a photographer.

Ask him the name of the flower and he’ll readily acknowledge plant nomenclature is not his strength. “I’m not a botanist, but I am a lover of flowers.”

The images are named not for plants but for people, such as family members, and those taken by cancer, with the exhibit proceeds aimed in part to aid the fight against the disease.

In some images, the proximity of Mounib is nearly palpable. In Teta [grandmother] Mary, a limpid bee rests at the center of a wheel of long yellow petals. A bud, perfectly poised as it begins to break, orbits to one side. A place on the bee’s convex mid-back, like a tiny obsidian mirror, holds the photographer’s reflection.

“Photographing flowers, you have to be patient. It’s almost like photographing wild animals. You have to wait for the right light.”