On the first anniversary of Hurricane Maria’s hit on Puerto Rico, recovery remains a work in progress, gardens included.

The storm robbed many people of the plantain, banana, avocado and other fruit trees that are common on the island and so important as staples.

LA BANDERA: Near the governor’s mansion in Old San Juan, in early August 2018, the roots of a toppled tree fly a painted version of the flag of Puerto Rico. Photo Credit: Jonael Bosques

“Most of the trees were gone or heavily damaged,” said Jonael Bosques. Bosques, who grew up in Moca, Puerto Rico and is now extension director in Hardee County, Florida, helped calculate agricultural losses and coordinate provision of aid in the storm’s aftermath. “The emergency was so great that people were not getting fed.”

He made his first post-Maria visit to the island in early August.

“They are still doing that,” he said. “The impact to the household is great.”

On an island that relies heavily on imported food, the hunger in the wake of the storm has cast horticulture in a new light.

Edrick Marrero, 35, a University of Puerto Rico extension agent, said he sees greater interest in home gardening and wants people to be better prepared to feed themselves.

Marrero, who teaches at the University’s Mayaguez campus, can vouch for at least one source of fresh produce that can survive a hurricane: the 5-gallon bucket garden. It’s a container fashioned to incorporate a reservoir of water at the bottom that can be drawn up by soil and plant roots.

“It’s very low maintenance,” said Marrero, who keeps several of the bucket gardens on the terrace of his third-floor apartment. He moved the containers inside when Maria came and back out when she left, enabling a harvest of fresh peppers, tomatoes and cilantro. He also grows a potted Tahiti lime.

On a larger scale, there are efforts to bring more organization to home horticulture education, with a Master Gardener program on the way. Marrero said he received program training in Florida in June and anticipates a rollout in January. “Right now, we don’t have that kind of structure,” he said. “Here in Puerto Rico, it’s more informal.”

Informal, but dedicated, especially in places like the northwestern town of Moca, where Marrero also grew up. 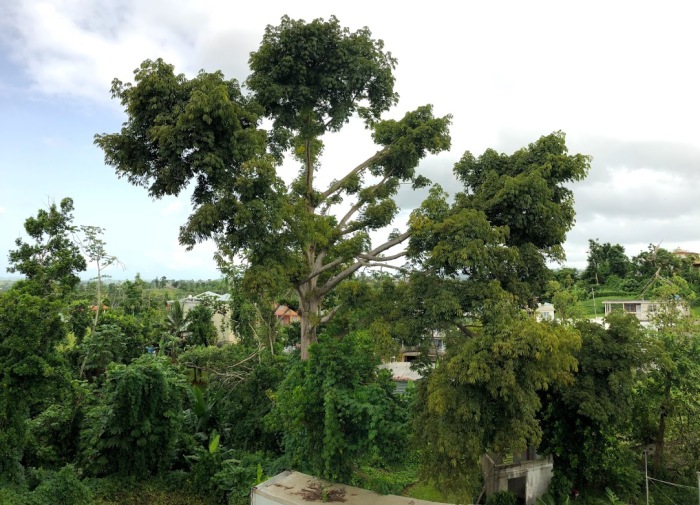 BETTER: Nearly a year after the hurricane, the ceiba shows its will in new growth. Photo Credit: Jonael Bosques