Might the hands of Japanese secret service agents been in the creation of the Yoshino cherry tree?

The tree’s origin is not as obvious as its voluminous blooms that now ring the Tidal Basin in Washington, D.C. It appears, though, that green-thumbed agents of the CIA-like Onmitsu had the opportunity, motive and ability to pull off the feat, according to researchers in Japan. 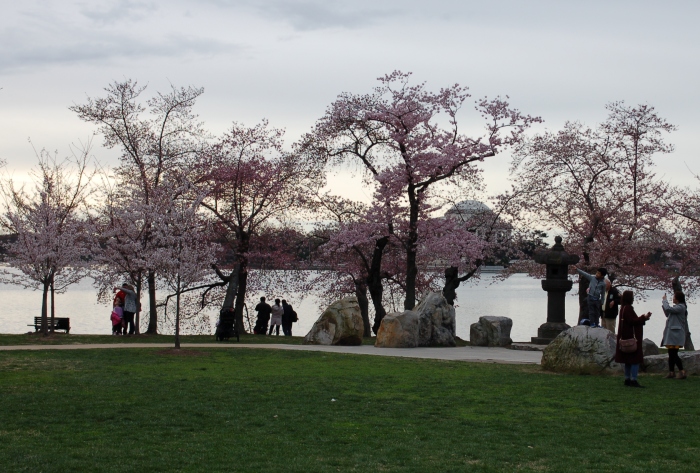 ALL SYSTEMS GO: Yoshino cherry trees light up the Tidal Basin on Sunday, April 1, 2018, drawing a steady flow of fans, despite the chilly temperature and overcast sky. The display began with a 1912 gift of trees from Tokyo as a gesture of friendship. All Photos Credit: John A. Bray

Researchers in Japan theorize that the tree stems from the Edo era, from 1603 to 1868, a peaceful stretch under a series of shogun military rulers.

It also was a time of horticultural innovation, which included a cherry tree reformation that likely led to the cultivar, although exactly how it happened is clouded. Tree DNA analyses suggest the locus of creation was the area around Kan-eiji temple, built to memorialize Edo’s first shogun, according to “Diversity and breeding of flowering cherry in Japan,” a 2014 article in Advances in Horticultural Science.

Cherry trees brought from Mt. Yoshino adorned the temple grounds and the entire project was directed by Takatora Todo, who was said to have organized the Onmitsu and lived in the Edo village of Somei, along with a gardener. The site became a popular place for Hanami, or picnicking under blossoms.

HANAMI: In Japan, the expression for picnicking under blooms. Source: National Park Service

Voila. Yoshino. Research indicates the cultivar was the work of a mid-Edo era father-son team, accomplished horticulturists from the Ito Ihei clan. They also were close with the Todo clan, probably tied into the Onmitsu, and might have carried out their hybridizing work in secret so as not to offend powers partial to other trees.

But the brilliant tree, also known as Somei-yoshino, could not be kept under wraps.

In the later 1800s — after the Kan-eiji temple was destroyed in the Boshin War that ended Edo and returned the emperor to power — the trees were extensively propagated by gardeners and sold as part of new Meiji Government industrial shows at Ueno Park, built at the temple site in the city that became Tokyo.

Yoshino became the predominant cultivated cherry tree in Japan and makes up the majority of the cherry trees in the area of the Tidal Basin.

WATERY PROMENADE: At 10:30 a.m. on Sunday, after a full moon and about an hour after high tide, the walkway beside the Jefferson Memorial heads underwater.

Professor Ikuo Nakamura of Chiba University, a co-author of the article who started analyzing the lineage in 1998, says that Yoshino trees are propagated with cuttings because the fruits they produce are hybrids and the seed will not reproduce the same tree.

As popular as Yoshino is in Japan’s public parks, school gardens and temples and along riverbanks, it is no staple of the home garden. Nakamura, in an e-mail exchange with TheHoe.org, said most Japanese home gardens are too small to accommodate the tree, also noting that the tree can draw a type of moth caterpillar, Monema flavescens, that has venomous spines that can cause painful skin injuries.

Keeping the trees healthy has its challenges. Grafting wounds can have lasting effects, leaving the tree susceptible to mushroom fungi infection and invasion by wood-eating insects, Nakamura said. Tree doctors tend to injuries and try to improve soil conditions, but most Yoshino don’t live past 60 years without treatment.

An alternative path to longevity runs underground. Nakamura said researchers have been working for the past 15 years to induce roots of Yoshino using tissue culture. “It is very difficult,” Nakamura said. “If Somei-yoshino could be propagated with its own roots, it would survive for more than 300 years.”

Garden Of Amity Grows Between Virginia Beach And Miyazaki