Susan Bahcall spent a late-August Thursday afternoon trying to turn her zucchini into fritters like those she’d tasted at a local Greek restaurant.

“I got the recipe from the Internet,” she said. “They didn’t turn out as well as I would have liked.”

By early evening, she was making care-taking rounds in her garden at the Glover Park Community Garden, beside Glover Archbold National Park in northwest Washington, D.C.

Bachall has gardened there for 20 years, all of them in the same spot on the lower south side of the sweeping grid of small plots. It’s among the farthest from the street and closest to the woods. It has its advantages, she says, like when it’s time to repave the byways that run between the gardens.

“We have to keep our paths chipped,” she said. “It’s close to the chip pile and I don’t have to haul too far.”

Bahcall, who has spent most of her life in Washington, D.C., and is a retired English composition teacher, said the city’s weather patterns challenge gardeners, perhaps particularly those seeking plants that like a long, cool spring.

“Spring starts out nice, and then all of a sudden it gets really hot,” she said. “And things start to bolt.” Usain Bolt. Plants, such as her spinach, flower like they’re drafting off of the Olympic gold-draped sprinter, undermining good leaf development.

So at least there’s chicory, the bitter green thriving in a section near the middle of her garden.

CHICORY UNBOUND: The only missing elements might be the scuba divers. Photo Credit: John A. Bray

“It seems to love any kind of weather and pests don’t bother it. It’s very easy to grow,” she said. “I just chop it up and stir-fry it with other things. It adds a little bite.” 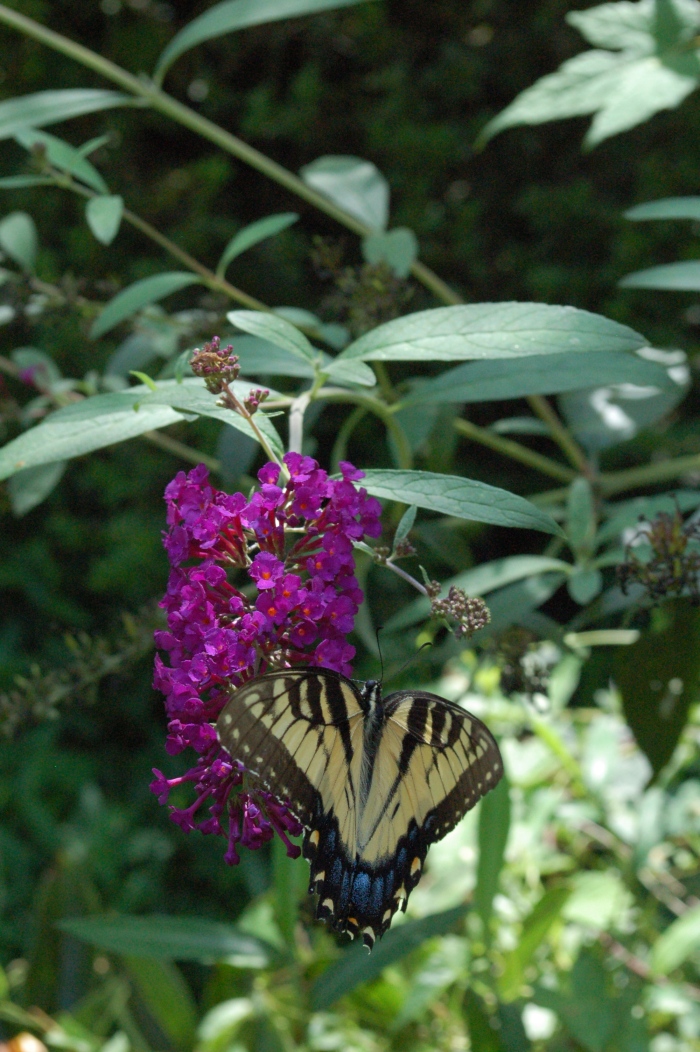 THIS BUDDLEIA’S FOR YOU: A swallowtail butterfly taps into a butterfly bush, as it is commonly called, near the perimeter of the Glover Park Community Garden. Photo Credit: John A. Bray