It seemed for a while that clouds of gray would stop the light from shining on a tribute in Glover Archbold National Park to nature conservationist and park hiker Rachel Carson.

But on Tuesday, September 27, 2016, the sunshine broke through in time for the 1 p.m. dedication in the park of a wayside that calls attention to the “Silent Spring” author’s role in environmental protection, as well as the contributions of park namesakes Charles Glover and Anne Archbold.

The event — held on the park slope by Reservoir Road, between Foxhall Village and Georgetown University — drew about 35 people, including D.C.’s delegate to the U.S. House, Eleanor Holmes Norton, who played a key role in pushing for the recognition. 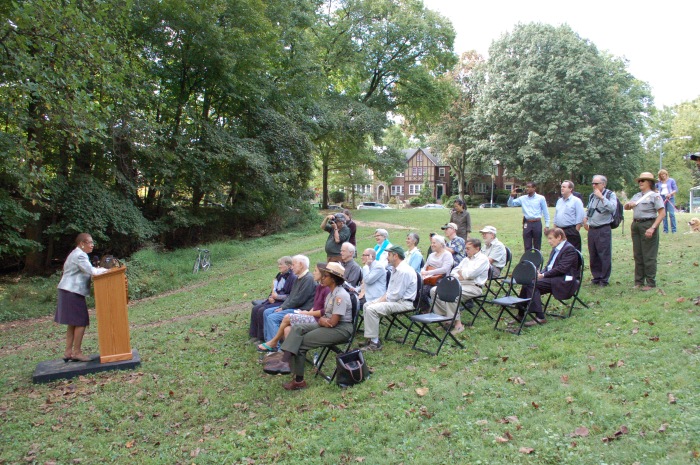 Norton praised Carson’s appreciation of the woods and noted that she served as a federal employee.

Carson was a scientist with the U.S. Department of the Interior and led birding hikes in the park, where she was photographed for Life magazine. She served as a director of the Audubon Society of the District of Columbia, which pressed for protection of nature.

The park was established with land donations in the 1920s from Glover, a Washington banker, and Archbold, a Washington transplant and the daughter of a Standard Oil Trust executive.

Norton said Carson “understood that, where she lived, she could explore nature” and that parks across the city help glorify their communities. Norton downplayed her own part in what she said was a four-year drive for the tribute.

“This is a community led effort,” she said, highlighting advocates’ persistence and the evidence they collected showing that Carson’s park connection was significant. 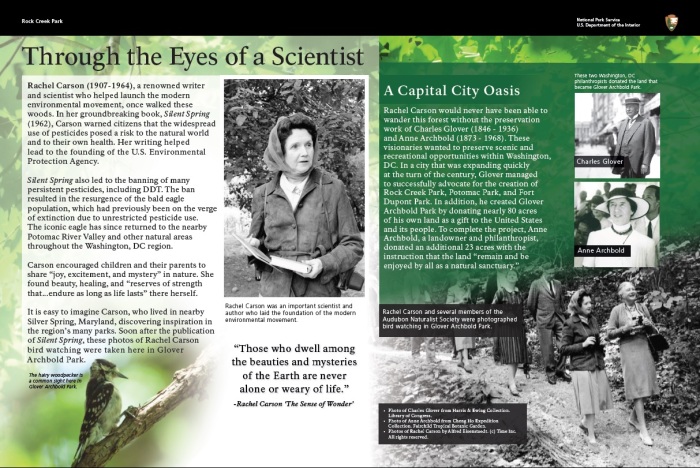 CARSON AND GLOVER-ARCHBOLD WAYSIDE: A copy of the presentation, as it appears on the new marker in Glover Archbold National Park at Reservoir Road. Credit: Provided By National Park Service

She said she had gained support in Congress from House and Senate members for the recognition, but fell short of the goal of having the path through the 2.5-mile long park officially named for Carson.

Though she said she was impressed with the evidence, “the judge turned out to be the park service.” The National Park Service decided that Carson’s legacy was “worthy of commemoration,” as shown by the many sites across the country named in her honor, but that her association with the park lacked the “exceptional importance” that would justify trail naming, according to an agency letter to Norton.

Norton chided the park service for its “technicalities,” adding that “we’re here to declare victory.”

The park service organized the event, with Rock Creek Park Superintendent Tara Morrison noting in her introduction that it is the service’s centennial year as national parks caretaker. She said nearby school students are among Glover Archbold’s visitors and that she hoped the inspiration embodied in the wayside would inspire explorers and protectors of nature in the next generation.

Among the advocates for the marker was Diana Post, president of the Rachel Carson Landmark Alliance, which is based in Carson’s former Silver Spring home in Maryland. Post, who worked closely with Foxhall Village resident Howard Bray on the wayside project, said Carson was a renowned scientist but also had an “emotional response to nature for which she did not apologize,” and that the complexity and delicacy of the ecosystem that drove her sense of wonder was essential to protect.

At the conclusion of the remarks from the podium, many in attendance joined a park ranger on a birding hike into the woods. 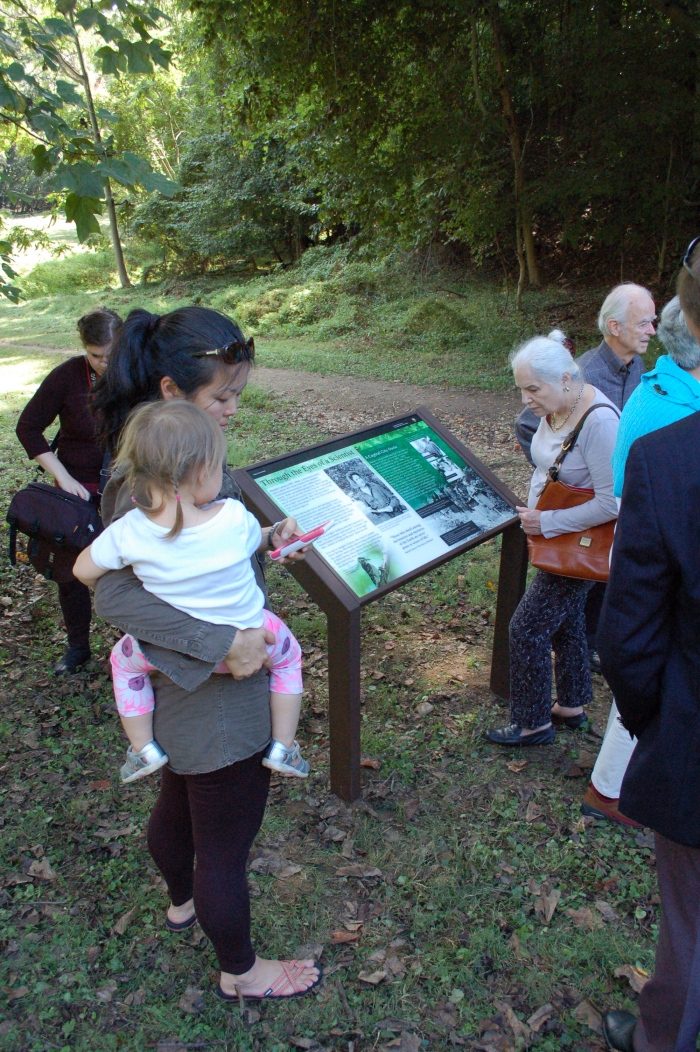