It’s mid-October and the nearly 15-foot tree, neatly draped in black netting, is laden. Vanessa Colbert pulls open a section of the bird screening to offer a clearer view of the ripening figs, squat globes set in a deep maze of dark green, lobed leaves.

The tree has come a long way since Colbert planted it about seven years ago, starting with a mere cutting given to her by a friend.

“It was just a skinny stick with a few leaves on it,” said Colbert. She did not know the type of fig, which quickly began to fill the rear of her narrow yard just off the burgeoning H Street corridor in northeast Washington, D.C. 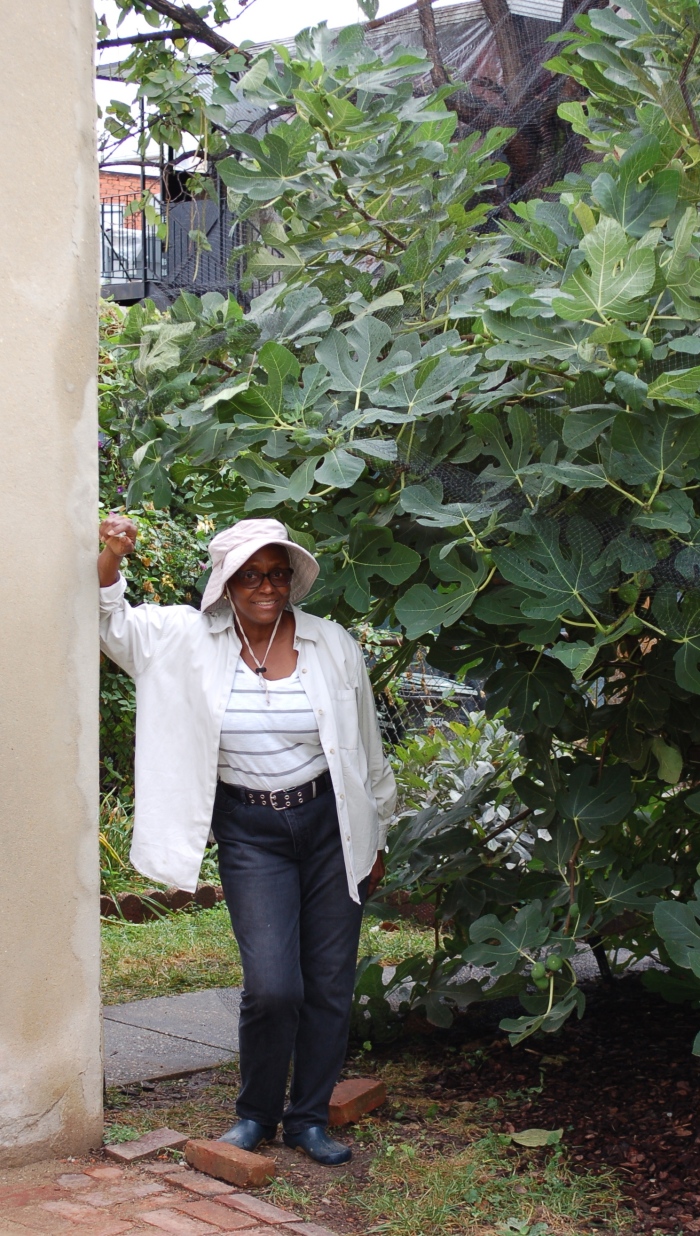 Vanessa Colbert of Washington, D.C., tends a fig tree that she started seven years ago from a cutting and later typed as an Armenian after it started producing an unusually bright fruit. Photo Credit: John A. Bray

The tree’s fruit color was unlike the Brown Turkey fig, which is common in the area and produces figs that ripen from green to dark purple.

“I kept waiting for them to turn, What’s wrong with these things,” said Colbert, describing how the figs commenced green, swelled big and brightened, a transition she likened to the color change of a ginkgo tree leaf. “It’s a golden kind of yellow, but it has a green tinge,” said Colbert, a native Washingtonian and artist who has worked using techniques such as etching glass, painting and silk-screening. “I picked one and ate it and that’s when I figured out when they would get ripe,” she said, noting the flesh color is much the same. “Oh, that flavor is really, really sweet, and they are extremely juicy.” 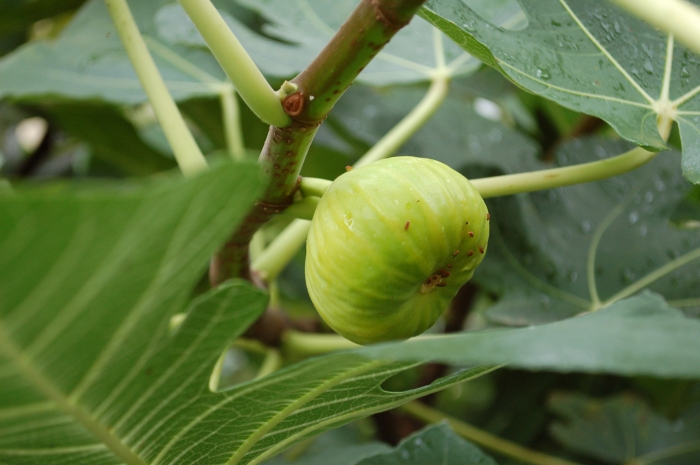 A fig that turns chartreuse on its way to a golden ripeness. Photo Credit: John A. Bray

Curiosity sparked her to fig research online and comparison of descriptions. “When I looked, it turned out to be an Armenian,” she said.

It might or might not be a match with the similarly described Armenian fig tree, a.k.a. DFIC157, included among the 300 varieties in the national fig tree collection maintained by the U.S. Department of Agriculture in Davis, California, where John E. Preece is supervisory research leader/horticulturist at the National Clonal Germplasm Repository.

“That doesn’t necessarily mean anything to me,” Preece said of the tree label. “There are a lot of Armenian nationals in the country and they have brought material from the old country, and the one in my backyard might be different from the one in your backyard.”

“People have been rooting fig cuttings for thousands of years,” Preece said, adding that today’s cultivated varieties “all root pretty easily.” But while propagation with fig cuttings — tree stems that sprout roots and mature like the source — is straightforward, researchers have revealed intricate plant botany. For example, the fig fruit itself develops from an inverted bloom that contains a complex inflorescence. For varieties that require insect help with pollination, the form leaves only a tiny opening at the bottom. It’s a difficult strait for entry by the fertilizing wasps, which function in the dark, and can sometimes bring in damaging fungus that thrives in the sugary environment.

“When I took this job it took me a while to learn the figs,” said Preece, formerly a horticulture professor at Southern Illinois University for 30 years, and a textbook co-author who likes eating the fruit. “When I retire I’m going to put in a fig or two, but I don’t need to right now. I’ve got 300 trees out in the orchard.”

Commercial fig production in the United States is concentrated in California, with the biggest world producers clustered around the Mediterranean Sea. But at least one patch of land on the other side of the country, in the nation’s capital, is gaining fig weight.

“One year I had so many figs I didn’t know what to do with them,” said Colbert. She decided on fig jam, making enough to set up a table outside her house and sell jars to people overflowing from the H Street farmer’s market. She also has turned excess figs into wine. “It’s a family tradition. We make wine out of whatever we have too much of.”

Colbert, who has a peach tree at the other end of the yard, has decided that her fig tree is worth tending. She said she annually cuts away the suckers that sprout around the trunk, and prunes and fertilizes, “trying to keep it in the perimeter I want. I’ve kind of figured out what seems to work.”

Ripening figs load a limb under black netting designed to keep birds away from the fruit. Photo Credit: John A. Bray