Coal’s prospects in Appalachia hit a low in July with big mine operator Blackjewel’s bankruptcy. But the purple-flowered heritage pole bean called Coal Camp might be up and coming.

Lewis Jett believes there’s an untapped market for such beans, mountain beans with a deep connection to Central Appalachia, beans that might give a bit of a boost to the local economy and provide a tastier and more nutritious alternative to the prevalent commercial “green beans.” It’s a difficult equation to solve.

About three years ago, Jett, an associate professor of horticulture at West Virginia University, started to collect and test pole beans and half-runners, aiming to identify beans and growers with the goods to meet the demands of potential buyers, including a Veterans Affairs hospital.

About 15 to 20 varieties have made the cut so far. Coal Camp, a pole bean from central West Virginia, is a standout, Jett said. It produces reliably, with a tender hull and a bean inside that turns brown to black when dried. The vine could pass for an ornamental, with its bright blooms and purple-tinted tinted pods.

Appalachian gardeners have grown heritage beans for generations. But they’re an unfamiliar crop to many people and one with a reputation in some circles for toughness. People can be quick to dismiss the bean category because all they’ve ever eaten are “green beans”.

They’ve gotten the wrong idea, at least when it comes to heritage beans, which, says Jett, are “just better quality beans.

“They are harvested when the bean itself is forming in the pod, versus a ‘green bean’, which is just harvested with the pod — people are just eating pods,” Jett said, adding they get not much more than maybe some Vitamin C. “So here they are getting more protein and fiber. There are more flavor constituents.”

The heritage beans have their frustrations. For example, “strings”, fibers that zip down on either side of the pod and must be removed for processing. The birthplace of the seeds and the temperatures where the plants grow can make all the difference.

“It’s climate change. We’re warmer. The plant responds to that by making a tougher pod,” Jett said, emphasizing the benefit of growing in the cooler mountain climate with locally grown seed. Swinging the growing cycle to earlier or later in the year might help in warmer climates.

Trellising the beans is a must to avoid matting of the vines, which can go 20 feet with pole beans, less with half-runners. The right trellis, if it aids airflow that helps prevent plant diseases and makes harvesting easier, might make the beans more commercially viable. Jett’s team has come up with a tilted panel trellis, strung with netting of plastic or sisal twine and angled over the planting row at about 60 degrees. As the beans form, gravity helps pull them from the canopy to aid handpicking.

Mechanical harvesting, perhaps by running a hedge trimmer along the row and catching the beans on a tarp, probably wouldn’t be worth the trouble, Jett said. Heritage beans mature at different times and a grower would likely lose too many young beans and flowers in a uniform pass by a machine.

The bean market is still in the making. Jett thinks the crop might be suitable for microwaveable bags. “We’re not there yet,” Jett said. “Just getting them frozen and sold in the winter would be a big step forward.”

Barbara Hartman, chief of nutrition and food service at the Medical Center, which serves 1,400 meals a day, said that for the past 10 years “we’ve been working on greening it up.” That effort has included reducing food waste, on-site composting and buying produce grown locally.

“We don’t mind paying a bit of a premium for local food,” Hartman said, “but we do need to keep it within reason.”

Hartman said local produce accounts for about 5 to 7 percent of what’s consumed at the Medical Center. “We would buy a lot more if the supply was there. “We’re slowly seeing it trending upward, with some years not so good,” she said, adding that farmers also have other markets to serve, including markets in D.C. and Baltimore that offer high prices.

Patient surveys have shown desire for local produce. “A lot of our veterans have their own gardens,” she said. “They can. They freeze. A lot of these people are from rural West Virginia. They don’t have a lot of money, but they have a little land. The soil in this area is pretty good.”

Hartman is confident the Medical Center’s kitchen staff of four certified chefs and at least eight cooks, some trained in the military, can manage heritage beans. “We’ve got some people who can come up with recipes that taste good and standardize them for quantity cooking,” she said. 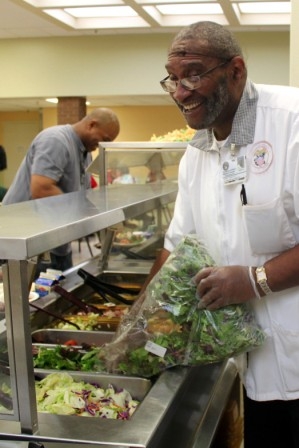 Jett, a native West Virginian from Lost Creek, said he keeps looking for people who have heritage beans and knowledge about production methods. “We just need a team of people to look at improving heritage varieties, do a little bit more breeding with them, and see if we can’t tighten up some things,” Jett said.

The beans might give the many diversified small farmers in the region another option to help keep the economy – and the beans – going.

“Just because something is old,” Jett said, “doesn’t mean new people who haven’t heard of any of these beans wouldn’t buy them, wouldn’t eat them and wouldn’t enjoy them.”