The affair with the Meyer lemon tree began in San Francisco. Dave Coulon gave the tree to his wife, Ingrid Bush. Exactly what prompted the gift has faded from memory, but it turned out to be no fling.

When they moved two years later to Washington, D.C., the tree came too, lasting two weeks in a dark crate with the household furniture. 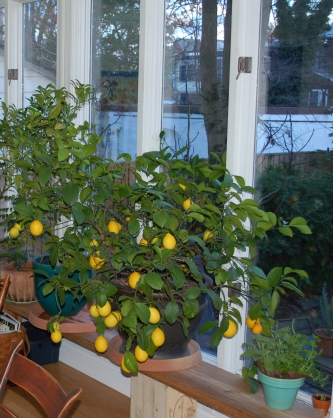 CITRUS SELF-ORNAMENTATION: A Meyer lemon tree that has been in the household of Dave Coulon and Ingrid Bush for more than 16 years shows off at their home in Washington, D.C. Photo Credit: John A. Bray

It survived a summer-long separation, being reduced to a “desiccated husk” at home with a house sitter while the couple and their two children were overseas. It has made it through many winters, weathering the shifts inside and outside with the change of seasons.

After more than 16 years, the relationship endures. “It’s like a member of the family,” says Bush. “When it blossoms it has a phenomenal fragrance. The fruit is amazing. If someone was going to detonate the garden, that’s the one I would save.”

When I visited them in early December, the terra cotta-potted tree had just been brought in from the cold, an act of considerable lifting that wasn’t necessary in their California clime. It was perched on a long, low shelf in front of a wall of south-facing windows, and festooned with dozens of lemons. “It’s kind of hit its stride,” Bush said.

For upkeep, she says she relies mainly on her eye and plant sense rather than formulas. If she sees the leaves starting to yellow, in goes a little citrus tree fertilizer. If sap-sucking scale starts tiling leaves, she scrapes away the flat, oval-shaped brown bugs. Light pruning is enough to maintain the tree’s bushy habit.

Some years produce better than others, but usually it’s an ample crop, which goes into favorites like lemon tarts, lemon pancakes and lemon curd. Says Coulon, “A friend of ours does a lemon anchovy pizza that’s really good.” Friends with lemon benefits are those with appropriate regard for the treasure they receive.

“They are certain people who I know will appreciate that it is not just a lemon,” Bush says. “They take a long time to ripen.”

The allure of Meyer lemon comes with a disturbing backstory. Citrus is facing a new disease that has upended commercial groves and prompted dramatic changes in production, and the home gardener – even in cold climates — is within the loop. Greening disease, which made its U.S. debut in 2005 in Florida and appeared in Texas and California in 2012, is a bacterial infection that mottles leaves, disfigures fruit, sometimes turns ripe fruit green, and eventually kills the tree. Citrus psyllids, an aphid-like insect, spread the disease as they feed tree-to-tree, taking up and depositing bacteria-tainted fluid. Wanton grafters can do the same by taking cuttings from infected limbs and reattaching them to healthy plants, a danger heightened by the ease with which citrus with different genetics intermingle and because diseased trees can be asymptomatic for multiple years.

It was in southern China, according to University of Florida reporting, that greening disease, a.k.a. Haunglongbing or “yellow dragon disease”, first appeared in 1919. University of California, Riverside reports say that a variety of forms of the disease exist, including the Asian, which shows up in warmer conditions, and African, which prefers cooler environments.

The disease has taken a toll, with a University of Florida report stating that, by 2014, it had pushed down the state’s orange yield 42 percent by 2014, though it noted that a rash of hurricanes also had a hand.

Only 30 infected citrus trees have been detected in California, all in the same two residential communities in Los Angeles County, with 17 of the trees being discovered in 2016, according to Victoria Hornbaker, citrus program manager for the state Department of Food and Agriculture. “So far, knock on wood, nothing in commercial production, nothing at any of our nurseries,” Hornbaker said. But she noted the latency period of the disease and said “it is very likely there are trees out there that we have been unable to detect” and that all of southern California is “what we call generally infested” with the psyllid. The insect also has been found in the Central Valley, the main citrus production area, potentially arriving on loads of fruit from the southern part of the state. “We’re trying to address that issue through enforcement activities,” she said, adding that survey efforts are extensive, with training being done in Florida.

Demand for Meyer lemon trees, however, is on the rise, if Florida figures are fair indication. 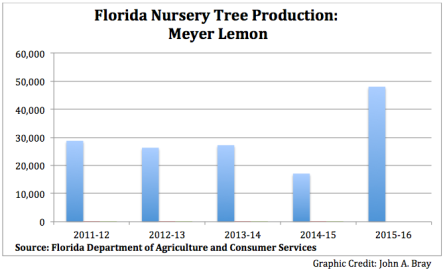 The number of trees produced by nurseries in the state nearly tripled from 2014-15 to 2015-16, going from 17,115 to 48,014, according to F. Benjamin Rosson, Chief, Bureau of Citrus Budwood Registration, Florida Department of Agricultural and Consumer Services.

“Overall, we’ve seen a downward trend in propagation, but the dooryard has taken off,” Rosson said. “With greening being so prevalent, nurseries are looking to diversify into other markets, and the homeowner market is a good one for them.”

Meyer lemon production also might be headed up in California, according to Jeff Cesca, director of marketing services at the state agriculture department. He said the department does not officially track Meyer, but checks with industry contacts show that 170, or 20 percent, of the state’s 820 acres of the trees are non-bearing, indicating substantial new plantings that are not yet producing fruit. “We know that the specialty lemons are becoming more popular,” Cesca said.

Tim Gast, who manages a small citrus grove at the University of Florida’s Research and Education Center of Southwest Florida, said nursery tree production in Florida is tightly managed. “They don’t propagate something until a grower comes in and says, I want 6,000 of this,” Gast said, noting that the state keeps an account. If disease pops up in a grove, the records help regulators trace the source.

Work at the research station includes grafting different types of trees onto different rootstocks to test the affect on aspects of growth such as tree size, and capacity to bear different soil conditions and resist diseases.

“I put a box of Meyer lemons out a few weeks ago for the staff,” said Gast, a 30-year veteran of citrus production, including time in Central America, Brazil and China. “I like to pick different varieties and send out a little e-mail — saying they’re in the break room if you want to take some — and give a little history.”

Frank Meyer of the U.S. Department of Agriculture is credited with introducing the Meyer lemon to the United States in 1908, having found it in China. Not a true lemon to purists but a hybrid, the fruit is typically thin-skinned, but not so acidic.

Aaron Dillon is vice president of Four Winds Growers, a nursery located in the San Francisco Bay area. He represents the fourth generation in the family business, which he said has held on through dramatic operational changes and industry contraction in the face of greening disease-related regulatory mandates.

“Those of use who are left are producing in very expensive screen structures that are highly regulated,” Dillon said of efforts to short-circuit the contagion and fend off the citrus psyllid. “We went from being a 22-acre outside nursery to now we’re in about six acres of greenhouses. Every opening of the building has to be covered with a screen to keep out a bug that size.”

Dillon told me that regulators come every six months to test hundreds of leaves for the disease and the buildings are inspected every month to make sure they are free of breaches.

It’s been a steep learning curve, said Dillon, who returned to the business after 15 years away, earning a masters degree in geography and pursuing a college teaching career. “I found myself coming back to it,” he said. “My grandfather said, when you’re in the nursery business you’re with plant people. Plant people tend to stop and smell the roses.”

Dillon said annual tree production at his nursery totals 350,000, including 100,000 Meyer lemon trees, which he said is “by far the most popular variety” he grows. He said the tree can live for 30 to 40 years.

“They are either fruiting or flowering almost all year,” he said. “You can grow a Meyer lemon in Chicago and definitely get fruit,” Dillon said. 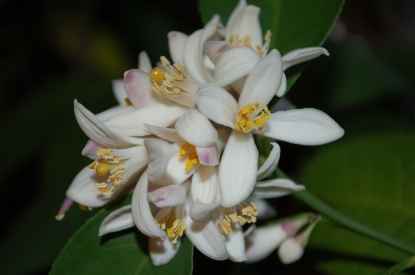 With an orange, for example, success is chancier outside its natural environment because it has a more rigid production cycle, according to Dillon. After California, New York City generates the most inquiries on the company’s website.

The tender Meyer lemon is poorly suited for the bins of big shippers, creating a kind of exclusive province for its cultivation. “If you want to get Meyer,” said Dillon, “you either have to grow it yourself or you have to find it at a farmers market.”

The U.S. Department of Agriculture’s Animal and Plant Health Inspection Service focuses on protecting commercial production. But all kinds of travelers can pose risk by unwittingly carrying insects, fruit, and tree grafts from one place to another, says Yindra Dixon, an agency public affairs specialist. “When you’re sitting on a plane and you’re filling out that card on your flight from wherever to the United States,” she said, “it’s just really important to let us know what you have.” The citrus psyllid that carries the disease has a short life cycle from egg to adult, but not so short that it can’t survive a flight from Asia to California or a drive from Florida to Texas.

Dixon recommended home gardeners stay aware of quarantines and buy trees from producers that meet regulatory standards for infection control. Gardeners spotting signs of the disease in their own plants should report the problem to agriculture officials.