The drab hues of a basement meeting room at the Interior Department’s C Street headquarters were jolted with reflected splendor on Wednesday, as a panel of veteran photographers clicked through scores of images from their big beauty hunts across America.

NPS Historian Timothy Davis said they follow people like F. Jay Haynes, who was “lugging around gigantic cameras” in the 1880s in his bid to record everything from grand vistas to mundane infrastructure improvements to the peregrinations of the first national park tourists, while at the same time doing commercial work for the railroad companies. The renowned Ansel Adams apparently had the privilege of restricting himself to the iconic and artistic, according to Davis. 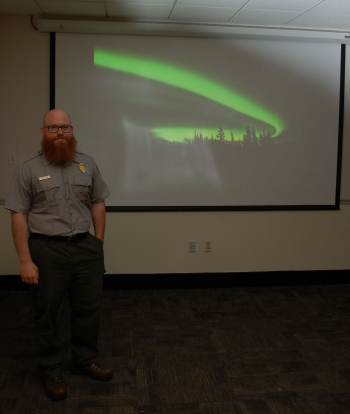 Jacob W. Frank of the National Park Service, Audiovisual Production Specialist at Yellowstone, with one of the photos he presented December 7, 2016 at a panel discussion at the Interior Department headquarters in Washington, D.C. Photo Credit: John A. Bray

“You’re not going to find Adams taking photos of tourists crawling around a kiva,” Davis said, referring to the ceremonial room of certain Native American dwellings in the Southwest.

The vanguard photos helped plow the ground for establishing national parks, Davis said, and the photographers who did deign to immortalize people enjoying themselves in these natural arenas advanced the argument for public support.

Much has changed. Much is the same.

Frank was a student at the University of Florida when he went out West for an internship at Grand Teton National Park, located in Wyoming, taking in the scenery as an amateur and shooting on “full auto” with a camera given to him by his mother.

He went on to become a NPS ranger, taking photos on his own time at many national parks, and, as he said, shooting an image of stars piled up around Delicate Arch on the Colorado Plateau that “put me on the map.” Frank recently landed a job as audiovisual production specialist at Yellowstone National Park, also in Wyoming.

The park photographer is Peaco, who started working at Yellowstone in 1980 with the park concessionaire, and moved to NPS as a truck driver in 1984. He called himself “fortunate to have been in Yellowstone all this time.” 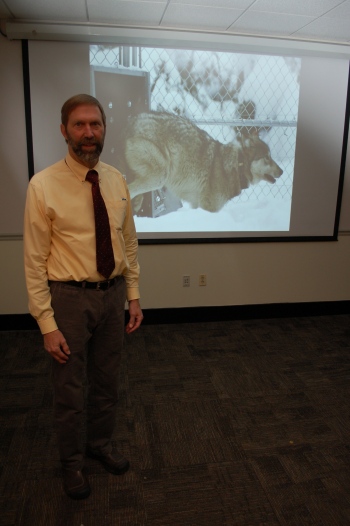 Jim Peaco of the National Park Service, park photographer at Yellowstone, with one of the photos he presented December 7, 2016 at a panel discussion at the Interior Department headquarters in Washington, D.C. Photo Credit: John A. Bray

But having just watched the diverse images of his fellow panelists roll past, he added, “I’ve missed a lot.” He didn’t miss the crested caracara, spotting the raptor that is rarely seen in the park on one of his truck-driving runs and snapping a photo to get, what said with a smile, was his “big break.”

He said the park managers decided, “maybe we need a steady photographer.” Shooting forest fires from the air with a Vietnam War veteran pilot, the moment of reintroduction of wolves to the park, and White House First Family visits are all in a day’s work, along with “grip-and-grins and oversized checks,” and time as park photo librarian.

Highsmith launched her photo career in 1980. She was a hobbyist captivated by a scene of urban dilapidation, the once-elegant Willard Hotel, located two blocks from the White House. “It was a pivotal moment in my life,” she said. “I quit everything.” Highsmith became a prolific documenter of American scenery, making news with a decision to donate her oeuvre of many thousands of images to the Library of Congress. She said she focuses not only on images such as crystalline aerials of famous landmarks but also the unheralded. “I love little places,” she said. “I go in with knowledge and the right camera, and make it look like it looks.” In Highsmith’s case, the camera itself might no longer be 19th Century “gigantic,” but the cost – noted by her to be more than $100,000 – is hardly pocket change. Highsmith said the technology allows her to make images with highly refined detail. 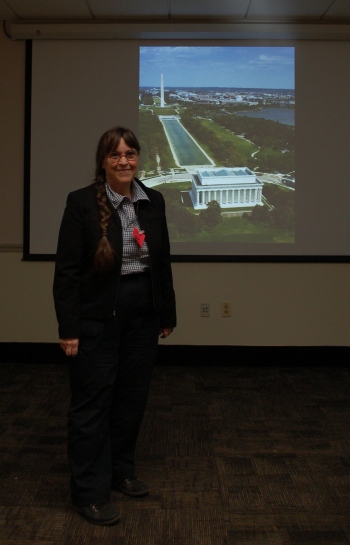 Independent photographer Carol M. Highsmith of Takoma Park, Maryland, with one of the photos she presented December 7, 2016 at a panel discussion at the Interior Department headquarters in Washington, D.C. Photo Credit: John A. Bray

But the field for shooting stellar photos of national parks has opened considerably. Steadily improving phone cameras and the Internet give almost any park visitor a crack at snapping an iconic image and uploading it to the universe. Ann Hitchcock, the NPS curator of the Smithsonian exhibit, said that the show has made room for many such images.

Frank said the flood of online images poses challenges for filtration and making a living from photography, but also offers the means for people to easily record their experience. “I’m glad everyone has a camera,” he said. Peaco said that what people see in the parks, like what he sees, is “sometimes plain old pretty. That’s the way it looks. It’s not always a zinger.”