Gregory Dennison gardens in Rockville, a town of nearly 300 in southern Utah, rimmed by the flat tops and jagged plunges of canyon lands.

“Every once in a while I have to remind myself to look up and see where I am doing this,” Dennison said when I stopped by to see an example of home horticulture in the high desert. It’s easy to get lost in the mesmerizing hues of the ancient stone faces. Zion National Park is a neighbor. But between rocks is a hard place to garden and the sound of thunder might mean something other than rain. 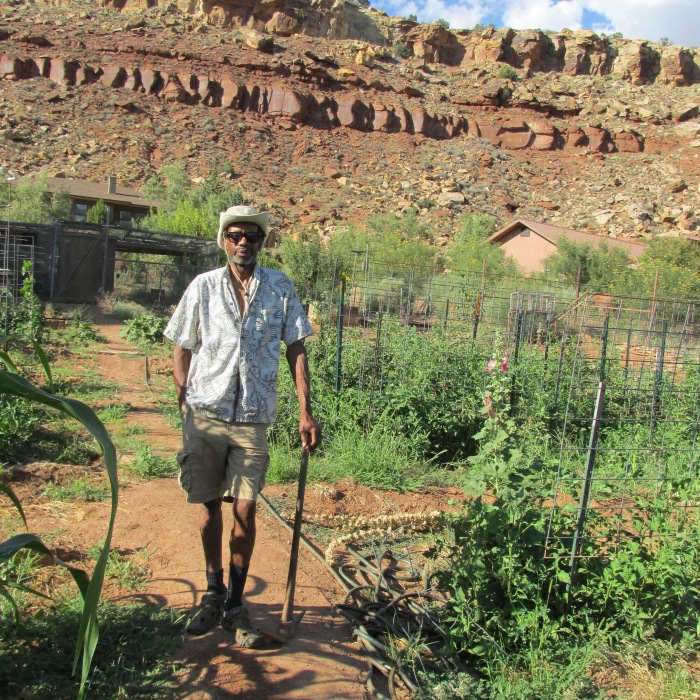 BREAKING GROUND: Gregory Dennison, leans on the pickax he used to help ready a site where he gardens in Rockville, Utah. The ground came with a cover of tough grass. “The Rototiller would not cut through it,” Dennison said. “I needed to clear the rows with a pickax.” Many of them, anyway. For the rest, Dennison turned to a friend with a tractor. Berms bordering the plots help contain irrigation water. Photo Credit: John A. Bray

Many people in the area trace their lineage to pioneering Mormons who put down stakes along the Virgin River in the mid-1800s. Dennison, a native of coastal South Carolina, is a relative newcomer, moving to the area in 2003 after first coming to the state in 1978 to study stage production at the University of Utah. Now an experienced grower in the community, he said he moved about a year ago to his current sites, the yard of the house he rents and the former garden of an old-timer who died and whose daughter wanted to maintain the plot’s character.

Soil types range across the region, but average pH is 7.8 to 8.2, according to Horticulture Agent Rick Heflebower of Utah State University Extension’s Washington County Office. Such alkaline ground inhibits nutrient absorption by many vegetable plants. Dennison said he has tried a variety of amendments to lower pH to a more conducive level around 6.7, counting acid rain as potentially helpful in that regard. Rainfall, no matter the chemical makeup, is sparse, coming mostly from July to August and December to January, with an annual average of about 10 inches measured in the Washington County seat of St. George.

Rockville provides two types of water: culinary and irrigation. The first comes from a canyon bench spring, and service is typical, in that it is piped, metered and available on demand. The second comes from the Virgin River, and only goes to property owners who own shares, a fairly exclusive group, and flows in pipes and ditches controlled by valves and gates. A share enables its possessor to draw water onto their property for a specified time on a specified day, which for some falls in the middle of the night. Both of Dennison’s plots have an irrigation share.

“Everyone makes sure they turn it on on time,” Dennison said. “Sometimes they forget to turn it off.”

Dennison gets about an hour on Sunday afternoon for one lot and an hour on Thursday evening for the other. There are no meters. An honor system applies, although there is a guy known as “Roach” who checks on irregularities. “He goes up and down the line to see if valves are being operated,” Dennison said.

Sometimes, people try to arrange to use a neighbor’s share if they plan to be away.

“You can’t just bequeath your water to someone else,” Dennison said, adding that the town doesn’t want a water share market that would encourage speculation. “You have to go through the water district first.”

The irrigation pipeline runs from spring to fall, closing for the winter freeze. Dennison said a reliable, if brief, “spring thaw” occurs in late January or early February, and water can be drawn from the pipe by special request.

“It’s complicated,” Dennison said of the system, “but they’ve been doing this for a long time.”

Town Clerk Vicki Bell says the system has been dependable. “We have one of the oldest water rights,” she said. “If they come through and cut people back, we would be one of the last.”

Future demand from gardeners is uncertain. “This town is getting to be relatively older folks and a lot of them have given up their gardens,” Bell said.

Water is considered precious in the region, but a mentality of use it or lose it also is in play. At some retail outlets in Springdale, just up river from Rockville, lines strung over patios produce jets of customer-cooling mist during the day.

Rain, combined with freezing and thawing, can precipitate another kind of fallout that casual passersby might not appreciate. On December 12, 2013, an estimated 2,700 tons of stone came loose from the cap of Rockville Bench. It tumbled and shattered its way down a 35 percent grade slope, crushing a house on West Main Street and killing two people inside, according to a 2014 Utah Geological Survey report by William Lund, Tyler Knudsen and Steve Bowman.

Paiutes, people who grew corn and squash in the canyon long before the Mormon arrival, believed that rocks had souls and could move on their own, according to “This Is Zion”, a 1969 book by naturalist Allen Hagood and published by the Zion Natural History Association, along with the National Park Service. They told stories of people vulnerable to the forces of nature.

Gardens are vulnerable to forces of automotive accommodation, as Lyman Hafen, recounted in a 2006 oral history collection, “Pioneer Voices of Zion Canyon”. “I park my car in a lot that was once the Crawford Family orchard,” the History Association executive director wrote in the introduction to the book by Eileen M. Smith-Cauros.

Dennison, who worked in tobacco fields as a youth, now grows a wide range of vegetable crops and fruit. He runs a small roadside stand. He has rehabilitated some of the fruit trees and planted others. He has dug long, shallow ditches that weave from the water source to the trees. Among them are nectarines, peaches, almonds, cherries, pomegranates, pears, pecans, figs and apricots, an impressive and tantalizing offering for a desert.

“As long as you’ve got water, you can grow just about anything,” says Dennison, who also deploys drip irrigation lines.

One spot of the garden is devoted to his heritage. “I’m from the South,” he said, standing over two surging okra plants. He says there isn’t much of a market for okra in Rockville – yet. “I’m looking to expand culinary taste here.”